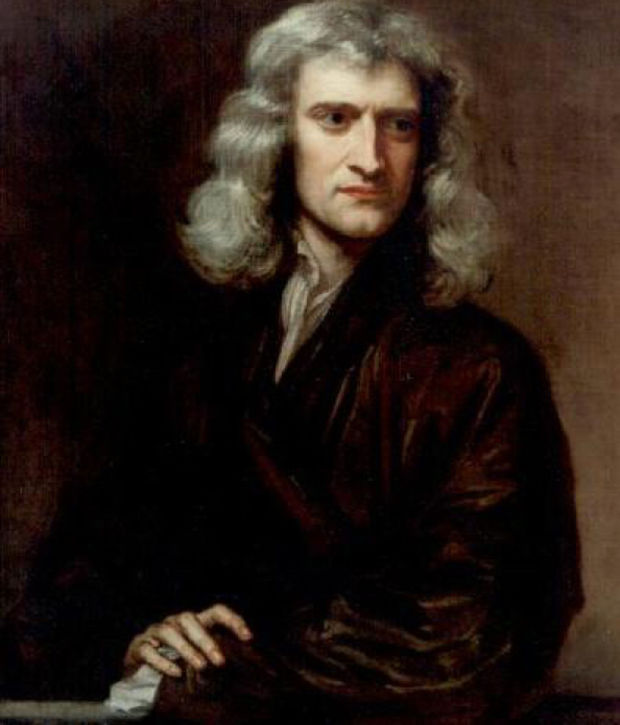 Routinely ranked among the greatest scientists who ever lived, the life and work of Sir Isaac Newton has forever changed history. Newton’s contributions to calculus, optics, the theory of gravity, and several other subjects were groundbreaking and laid the foundation for physical science as it is known today. It is safe to say that without Newton and his discoveries, the modern world would be far different than it is today.

Newton was born to Puritan parents on December 25, 1642 (4 January 1643 on the Gregorian calendar), in Woolsthorpe, Lincolnshire, England. Most of his early years were spent with his maternal grandparents, and he did not enter the university until he was age 19, which was older than normal. This did not mean, however, that he was a slow learner, for he demonstrated evidence of a superior intellect long before he enrolled in Trinity College at Cambridge University in 1661.

From 1642 to 1661, England was embroiled in a civil war that resulted in both the dissolution and eventual restoration of the monarchy. This was important because the turmoil allowed for the university to become more open to new ideas as strict supervision of the curriculum was not always possible as it was before the war. During his first few years at the university, Newton studied Aristotelian rhetoric, physics, logic, and ethics, although he eventually became acquainted with Descartes’ thinking through personal study of the great philosopher’s works. He also was self-taught in mathematics, and when the university was closed from 1665 to 1667, Newton experimented with optics, developed the theory of uniform circular motion, and made other discoveries. This period also saw him lay the groundwork of his theory of infinitesimal calculus, binomial expansion, theory of color, laws of motion, and theory of universal gravitation. All of this work was done mostly in isolation, and these discoveries account for the majority of Newton’s scientific achievements.

In 1667, Newton became a fellow of Trinity College, where he built his first reflecting telescope. This invention would later pave the way for his election to the Royal Society in January 1672. He became widely acclaimed as a mathematician and physicist, and he was named Lucasian Professor of Mathematics in October 1669. Incidentally, Newton could not initially find a publisher for his work on calculus, which he had first set into writing by the end of 1671. The struggle to publish this work led to the controversy over whether Newton or Gottfried Leibniz, one of Newton’s contemporaries, actually invented calculus. It now appears that the two men made most of their discoveries independently.

Beginning around 1670, Newton began the study of alchemy and theology, eventually studying astrology and making attempts to contact the dead. His views of the Christian faith grew more unorthodox; for example, he questioned the doctrine of the Trinity. Yet his fame as a scientist guaranteed that he would not suffer for his disagreements with the church. Alchemy was his true love, and he devoted much research and writing to the subject. He also studied chymistry, which was a seventeenth-century science that combined chemistry and alchemy.

In 1687, Newton published his recognized masterpiece, which is titled Philosophiae Naturalis Principia Mathematica (“Mathematical Principles of Natural Philosophy”; also known as the Principia). This work develops in detail Newton’s discovery that the force of gravity felt on earth also holds planets in their orbit around the sun. It also contributes several other conclusions about the movement of planets, comets, and other heavenly bodies, and it is often regarded as the first work of modern physics. The work is notable also for containing Newton’s three laws of motion.

Besides his work in mathematics and physics, Newton is known for his discoveries in optics. He demonstrated that white light is made up of a spectrum of colors through the use of a glass prism. He also created the first working reflective telescopes, as noted above.

During his lifetime, Newton had important friendships and correspondence with other important thinkers such as John Locke. Eventually, his time would be devoted to administrative and political matters in addition to science. In 1696 he went to work for the Mint as its warden and later its master. The crown recognized his contributions to science with knighthood in 1705. Newton would issue two revisions of his Principia and continue research and writing until his death in March 1727 at age 84. Today, human beings continue to benefit from his important scientific work.

• The Chymistry of Isaac Newton — This page contains information that focuses on Newton’s work in the area of alchemy.

• History of Calculus — Newton’s important contributions to calculus are described on this page.

• Holistic Numerical Methods Institute — There is an emphasis on Newton’s contribution to mathematics on this page.

• Inventor of the Week: Sir Isaac Newton — MIT hosts this page on Isaac Newton’s invention of the reflecting telescope.

• Isaac Newton: The First Physicist — Here is a page that describes how the science of physics was decisively shaped by Newton’s work.

• Isaac Newton and Gravity — A brief biography and information on Newton’s work with gravity can be found on this page from a University of Virginia professor.

• Newton’s Work and Influence — The Stanford Encyclopedia of Philosophy offers a biography of Newton and a discussion of his influence.

• Sir Isaac Newton: A Pioneer in Optics — Newton did pioneering work in the field of optics, as this page demonstrates.

• The Universal Law of Gravitation — Information on Newton’s famous work involving gravity can be found on this site.

5 Top Reviews on The Best Educational World Maps for Kids