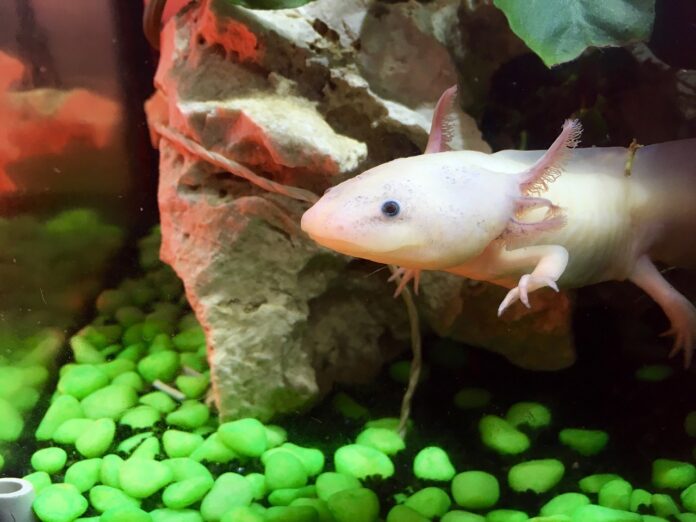 The axolotl, with the name Ambystoma mexicanum, is a paedomorphic salamander closely related to the tiger salamander. The species was first found in many lakes, including Lake Xochimilco, underlying Mexico City. Axolotls, which are amphibians, reach adulthood without going through a metamorphosis. It is a rare species among amphibians. Adults stay in the water and are gilled instead of moving to land.

Axolotls can grow up to 15-45cm in length and weigh between 50 and 250g. They live between 10 and 15 years. There are many known pigmentation types, including brown, black, and albino, as well as grey, pale pink, and grey. They have a rare condition called Neoteny, which allows them to retain most of their larval features through adulthood. It means that they still have many of the characteristics of a tadpole, including feathery gills and a long, quill-like dorsal tail fin.

Axolotls can survive on small fish, worms, insects, crustaceans, crustaceans, and crustaceans. They were the most important species in their distribution area until recent decades. However, invasive species like perch and tilapia have made them less common and threatened their survival.

How many Axolotls are left?

Wild axolotls were in danger of extinction by 2020, and the International Union for Conservation of Nature and Natural Resources (IUCN) has listed them as critically endangered in their wild population. They were also designated endangered under the IUCN’s CITES treaty.

Axolotls are a popular choice for scientific research because of their ability to regenerate their limbs, gills, and parts of their eyes and brains. Axolotls were also sold in Mexican markets as food and were a staple of the Aztec diet.

There are approximately 700 to 1,200 wild axolotls today. The depopulation of axolotl decline is mainly due to human development, water waste disposal, and habitat loss from droughts.

This species is a top predator in its natural habitat and has been accustomed to introducing large fish to its lake habitat. It is now critically endangered in the wild due to the urban sprawl and pollution that threatens its Mexican Basin habitat.

Why Are Axolotls Critically Endangered?

Axolotls have been classified as critically endangered by the IUCN conservation score. It means that they are at risk of becoming extinct soon, and their numbers are rapidly declining. It only applies to wild species. However, more axolotls are living in captivity today than in the natural world.

Many factors have led to a sharp drop in the axolotl population in recent years. Luis Zambrano (Mexican biologist) found 6,000 axolotls in the Xochimilco lakes complex in 1998. Today, there are only 35.

Rapid development in Mexico City has led to a significant increase in water pollution in the Xochimilco network. Some areas have become inhospitable for aquatic life.

Axolotl has become a Mexican delicacy, which has led to an increase in the demand from local fishers. Overfishing is the greatest threat to axolotl populations.

Rapid development in Mexico City has led to vast swathes of Xochimilco’s lake complex being drained and destroyed. It includes Lake Chalco, which was one of the axolotl’s most critical historic habitats.

Xochimilco’s top food chain was historically home to axolotls. However, a few invasive species have been introduced to the area, and perch and tilapia have significantly contributed to the decline in axolotl populations.

There is a real danger that axolotls will become extinct, and it has prompted a renewed effort to protect their numbers. Several axolotl pens have been strategically placed around Mexico City’s canals to provide shelter for the animals. Biologists are currently working on a project that will reintroduce lab-bred individuals to Xochimilco to increase numbers and encourage natural breeding.

Why are Declining Axolotl Populations Concerning?

Many freshwater and marine species face complex challenges in the wild. However, scientists are especially concerned about the declining numbers of axolotls due to their immense biological value. Scientists believe there are still many lessons humans can learn from these unusual salamanders, some of the world’s most well-studied freshwater animals.

Axolotls’ ability to regenerate limbs is one of their most fascinating attributes. For example, if an animal loses afoot, it can restore it in a short time. It is something scientists believe could have great biological value for humans and treatment of certain degenerative conditions.

While there are still a lot of axolotls living in captivity today, scientists are concerned about how inbreeding may be affecting their long-term health as well as their genetic characteristics. It could ultimately reduce their biological value. As diseases and other deficiencies become more common, there are concerns that inbreeding could have a long-term negative impact on conservation efforts.

It is evident that unless significant efforts are made to preserve axolotl populations in their natural habitat, the species is at serious risk of disappearing. This remarkable and unique species requires conservation.

How To Help Axolotls From Extinction?

According to a 2010 joint study of the University of Wisconsin-Madison with the National Autonomous University of Mexico (NAUM), the best option for saving the axolotl is to restore their habitat to a condition that allows them to survive and produce young.

Current efforts are focused on building axolotl “sanctuaries,” which will be located in Lake Xochimilco. These will allow the axolotl to be separated from the invasive fish using wooden gates. Reintroduction, which allows wild-raised axolotls to be released into the wild, is another option. However, it has been rejected due to fears of spreading chytrid and decreasing the genetic diversity of the wild populations.

You can also fight fungus using bacteria. A few amphibians have symbiotic bacteria naturally present on their skin, producing an antifungal agent that protects them against chytrid. It is possible to boost immunity by vaccinating unvaccinated populations with bacteria from healthy wild populations. Although it reduced the infection level, it didn’t eradicate the fungus.

You can also keep species alive in captivity at zoos or aquariums all over the globe. However, the wild extinction of the axolotl is imminent—the captive population numbers over 2,000. Captive populations can address current issues before they become severe or for future reintroductions if the habitat is restored.