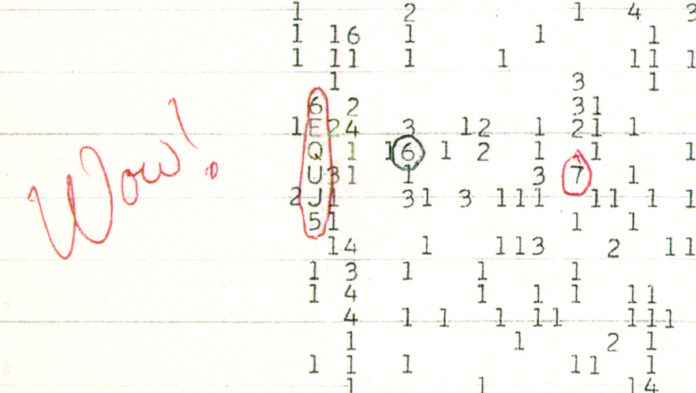 (Phys.org)—A team of researchers with the Center of Planetary Science (CPS) has finally solved the mystery of the “Wow!” signal from 1977. It was a comet, they report, one that that was unknown at the time of the signal discovery. Lead researcher Antonio Paris describes their theory and how the team proved it in a paper published in the Journal of the Washington Academy of Sciences.

Back in August of 1977, a team of astronomers studying radio transmissions from an observatory at Ohio State called the “Big Ear” recorded an unusual 72-second signal—it was so strong that team member Jerry Ehman scrawled “Wow!” next to the readout. Since that time, numerous scientists have searched for an explanation of the signal, but until now, no one could offer a valid argument. Possible sources such as asteroids, exo-planets, stars and even signals from Earth have all been ruled out. Some outside the science community even suggested that it was proof of aliens. It was noted that the frequency was transmitted at 1,420 MHz, though, which happens to be the same frequency as hydrogen.

The explanation started to come into focus last year when a team at the CPS suggested that the signal might have come from a hydrogen cloud accompanying a comet—additionally, the movement of the comet would explain why the signal was not seen again. The team noted that two comets had been in the same part of the sky that the Big Ear was monitoring on the fateful day. Those comets, P/2008 Y2(Gibbs) and 266/P Christensen had not yet been discovered. The team then got a chance to test their idea as the two comets appeared once again in the night sky from November 2016 through February of 2017.

The team reports that radio signals from 266/P Christensen matched those from the Wow! signal 40 years ago. To verify their results, they tested readings from three other comets, as well, and found similar results. The researchers acknowledge that they cannot say with certainty that the Wow! signal was generated by 266/P Christensen, but they can say with relative assurance that it was generated by a comet.