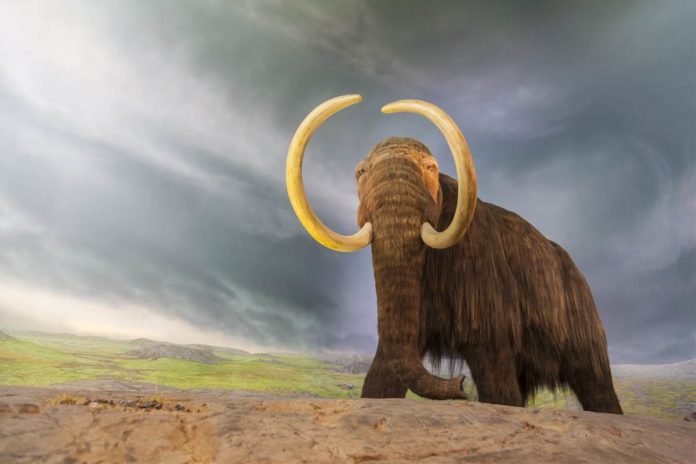 Paleontologists have dug up a 130,000-year-old mastodon skeleton that looks like it was smashed apart by humans. But they found it in America, where people were not supposed to have arrived for another 100,000 years.

How could that have happened?

The researchers say they think early humans must have come to America much, much earlier than anyone ever thought. They suggest that other scientists start looking for evidence of people in places they never bothered looking before.

If the conclusions are confirmed, they will turn North American archaeology upside down.

“I know people will be skeptical of this because it is so surprising and I was skeptical when I first looked at the material itself. But it’s definitely an archaeological site,” said Steven Holen of the Center for American Paleolithic Research in South Dakota.

The site includes a skeleton that looks like it was taken apart and broken with stone tools, which are left in place alongside the bones they smashed. One tusk appears to have been stuck upright into the ground.

“It appears to be impossible that a mastodon could somehow force its own tusk into the underlying deposits,” the research team noted in their report, published in the journal Nature.

The only reasonable explanation, they say, is that humans did it.

Uranium dating puts the site at around 130,000 years old.

“My first reaction on reading this paper was ‘No. This is wrong. Something’s wrong,'” said stone tool expert John McNabb of the University of Southampton in Britain.

“If it does turn out to be true, it changes absolutely everything.”

Current wisdom holds that modern humans arrived in the Americas no earlier than about 15,000 years ago. The oldest widely accepted site for the first Americans dates to just 13,000 years ago.

The main theory is that people crossed a land bridge across the Bering Strait between modern-day Alaska and Siberia during the last Ice Age, when sea levels were lower, and then migrated down the west coast.

Some other researchers have challenged this idea, but their findings are hotly disputed.

If the San Diego finding holds up, it likely means that Homo erectus, Neanderthals or a related early human species, the Denisovans, crossed much, much earlier. They could have crossed on foot during a previous Ice Age much earlier than 130,000 years ago, the researchers say, or come by boat.

It’s slightly possible that modern humans made the crossing, the researchers say. But no human remains were found at the site, so it’s impossible to say who butchered the mastodon.

“This discovery is rewriting our understanding of when humans reached the New World,” Judy Gradwohl, president and CEO of the San Diego Natural History Museum, said in a statement.

The site was first found in 1992 when road crews were putting up a sound berm — a wall of dirt to quiet traffic noise — along State Route 54 near San Diego. Paleontologists carefully excavated the mastodon skeleton, along with large, oddly-shaped rocks and the bones of other extinct animals such as dire wolf, horse, camel, mammoth and ground sloth.

They also got a good estimate of how old the site is.

What’s now a busy road was a stream bed 130,000 years ago, the researchers said. “It was a meandering stream close to sea level,” Thomas Deméré of the San Diego Natural History Museum told reporters in a conference call.

The smash patterns on the mastodon bones and the stones left nearby look as if humans used the stones as tools to break apart bone to use for more tools, and perhaps to get at the nutritious bone marrow inside the large leg bones, the research team said.

Strangely, it does not look like they cut meat off the bones — something that gives pause to experts like McNabb.

Most of the site was preserved under many feet of dirt and the Natural History Museum team carefully excavated and examined it by hand, documenting where each piece was and saving samples of dirt and rock alongside the bones and big stones.

It was not until years later that Holen and colleagues, looking for just this kind of evidence, set out to see if humans may have been at work at the ancient site.

The team believes they have assembled just such evidence. They got together experts in dating ancient geological deposits and bones. They compared the stones to stone tools from the same period in other, better documented sites in Africa. They looked at various other mastodon carcasses to see if natural processes could have broken and spread the bones in the same patterns.

They made their own stone tools and smashed elephant bones to see if it was even possible to do it, and to see if the smashed bones looked the same. They ruled out the possibility that scavenging animals broke the bones apart or that the trucks at the road site could have done the damage.

The geology of the site strongly suggests it was buried gently, with fine-grained silt covering the bones and stones, leaving them undisturbed for tens of thousands of years.

“These patterns, taken together, have led us to the conclusion that humans were processing mastodon limb bones … and that this was occurring at the site of burial … 130,000 years ago,” Deméré said.

James Paces, a geologist with the U.S. Geological Survey, used radiometric dating methods to determine that the mastodon bones were 130,000 years old. “We believe we have a robust, defensible age,” he said.

“The dates are truly remarkable,” said University of Wollongong archaeologist Richard Fullagar, part of the study team. “But it’s hard to argue with the clear and remarkable evidence that we can see in all of this material.”

Common wisdom holds that the first Americans didn’t arrive until 13,000 years ago in what’s called the Clovis culture, named after a site in New Mexico where distinctive stone tools were found in the 1920s.

And the archaeology mainstream is very unforgiving of researchers who challenge the accepted dates, said Al Goodyear of the University of South Carolina, who’s been working to prove for years that stone tools found in a South Carolina site date to as long as 50,000 years ago.

“There is a lot of ignorance and arrogance about just how little we know about the Western hemisphere,” said Goodyear, who was not involved in the San Diego discovery.

“These things are very controversial.” But Goodyear says the San Diego team’s evidence is compelling.

“I think they’ve done their homework,” he said, noting that Holen is one of the world’s leading experts on what mastodon bones look like when they are broken naturally versus when they are smashed open by humans.

“I think these sites are a wake up call to the profession,” Goodyear added.

Now the researchers want paleontologists and archaeologists to take another look at ancient sites to see if they can find any evidence of human activity. It won’t be easy — ancient human remains are notoriously difficult to find.

They also invite other scientists to examine and question their findings. That’s how scientists work — by publicizing discoveries and theories and inviting their rivals to pick them apart.

With enough evidence, that’s how common beliefs are changed.

The Science behind the Tech-Anxiety Effect