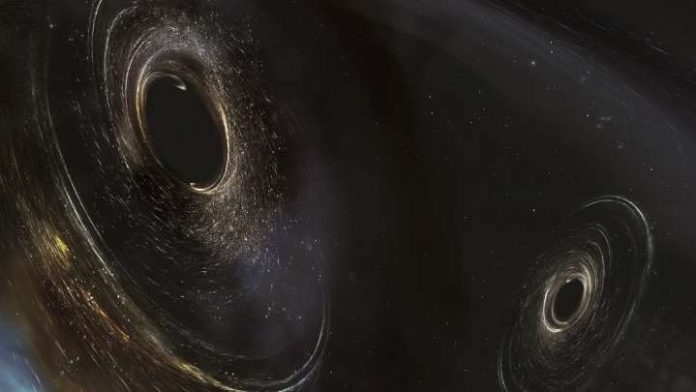 A LIGO and Virgo collaboration have announced a new detection of gravitational waves, which was observed on January 4, 2017, by the two Laser Interferometer Gravitational-wave Observatory (LIGO) detectors in Washington and Louisiana.

As reported in Physical Review Letters, the event was a black hole merger that created a single black hole with a mass 49 times that of our Sun. The event is also the furthest yet detected, located about 3 billion light-years away, more than twice as far as the previous two detections. The new black hole was formed by the collision of two black holes, one weighing 31 times the mass of the Sun and the other weighing about 19 times our star.

“We have further confirmation of the existence of stellar-mass black holes that are larger than 20 solar masses – these are objects we didn’t know existed before LIGO detected them,” MIT’s David Shoemaker, the newly elected spokesperson for the LIGO Scientific Collaboration (LSC), said in a statement. “It is remarkable that humans can put together a story, and test it, for such strange and extreme events that took place billions of years ago and billions of light-years distant from us. The entire LIGO and Virgo scientific collaborations worked to put all these pieces together.”

Like in the previous two cases, which were observed in September 2015 and December 2015, this was an incredibly energetic event. In a fraction of a second, the energy equivalent of two solar masses was released. That’s more than all the light of all the stars of all the galaxies in the visible universe give out every second.

The event, known as GW170104, also allowed researchers to understand more about the orbital configuration of the system before it merged. Black holes rotate on their axis (we say they have a spin) and they also rotate around each other as they spiral towards the inevitable collision. The direction of at least one of the spins appeared to be tilted with respect to the orbital plane and, by not being aligned, might have consequences for how these systems formed.

“By measuring the spin of the black holes, we aim to get information about how they came to be spinning around one another – about how they formed,” Professor Sheila Rowan, who’s part of the LIGO collaboration, told IFLScience.

“If they formed from the collapse of stars that were already spinning around one another in a pair, we might expect the spins of the black holes to be aligned with the orbit. If the spins are not aligned that gives a clue – with this system just a hint – that instead the black holes may have formed and then paired up later in a crowded cluster of stars.”

Is Salt a Compound Or Not?