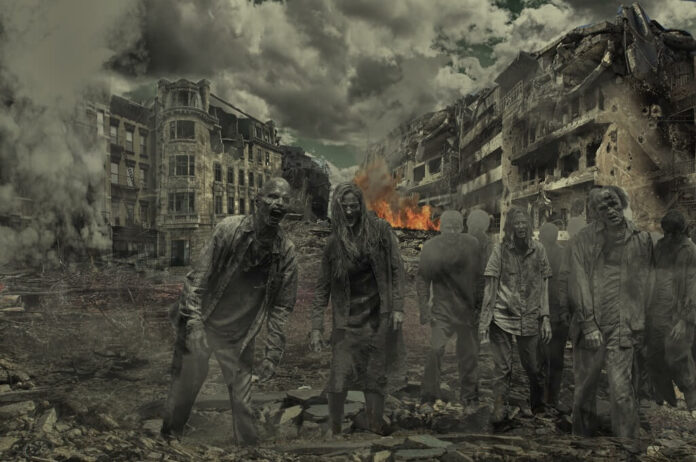 Zombies, or the undead, attack the living, and they often go in packs. They are known to lead brains to live. The movie madness about zombies has brought conspiracies that humans will turn into zombies one day, and a zombie apocalypse is just around the corner. How true is this, though? Is there really a chance for a zombie apocalypse?

A Virus Starts it All

Humans turn into zombies because of a specific virus that spreads easily. It is said that the zombie virus is transmitted through bodily fluids; therefore, you need to be bitten by an infected body to get infected.

The good news? You don’t have to fear a zombie apocalypse as you see in the movies because it’s impossible (hopefully) for it to happen.

See, zombies are undead only because the virus brought them back to life. However, the body can’t function on its own with only a virus to fuel it. The body needs to have oxygen and blood, and for the body to get these two things, the brain should be functioning.

As you know, zombies no longer have brains anymore—they’re dead, which is why they act the way they do due to the lack of brain function. That said, it’s impossible for the body to control the muscles and other essential parts for them to walk, run, and bite people.

So, even if a dead body is injected with the zombie virus, nothing will happen.

Despite the impossibility of a zombie apocalypse happening, science has something to say about it, though—some zombie symptoms may be real.

In the 1980s, there was a case of zombie-ness in Haiti that a Harvard ethnobotanist, Wade Davis, encountered. People were dying but getting back up again and moving on with their lives as if nothing had happened.

According to David, this happened due to a neurotoxin, a chemical that destroys nerve tissue, which causes zombie-like behaviors.

Mad Cow disease may also cause zombie-ness as well, due to the prions. Prions are only present in the human body when the owner eats brains. When this happens, the individual will lose control of their body and speech.

There are also some real brain disorders that have similar symptoms to zombies. An example is when there are lesions in specific parts of the brain that can cause garbled speech. Moreover, damage to some parts of the brain can also cause people to have uncontrollable appetites.

The Real Zombies on Earth

The truth is, there are real zombies around us today:

Ophiocordyceps is a genus of fungi that infects various insects, particularly carpenter ants, through spores. When it does, it takes control of the insect’s mind, then changes its behavior. The fungi attach and grow into the bodies of the insects until they die.

Zatypota wasp, which was discovered in the Ecuadorian Amazon, can manipulate spiders from the Anelosimus exams species, which was surprising. A. Eximus spiders like to be in packs and are very social. However, when infected by the Zatypota, they show bizarre behavior.

Although humans can’t be brought back from the dead, some viruses can be revived. The Pithovirus sibericum, a giant virus, contains a large number of genes. In this case, they are extremely dangerous because they can stick around for a long time. Moreover, it is tough and impossible to break open. Fortunately, the P. Sibericum can’t infect humans and animals.

Phytoplasma is a bacteria that has been found to turn some plants into zombies. It causes some plants to put out leaf-like extensions that attract more insects. As a result, bacteria can travel widely and infect other plants.

Should You Prepare for a Zombie Apocalypse?

The answer to this is simple—no. Zombie apocalypse, like the one we see in movies, is impossible to happen. However, zombie symptoms may manifest in the human body, insects, and plants. However, it’s not as gruesome as the ones we have grown to watch and get accustomed to.

Therefore, before you pack some zombie apocalypse essentials, you’re better off packing essentials for natural disasters like tsunamis, earthquakes, storms, and fire.

What Are The Most Intelligent Animals On The Face Of The...