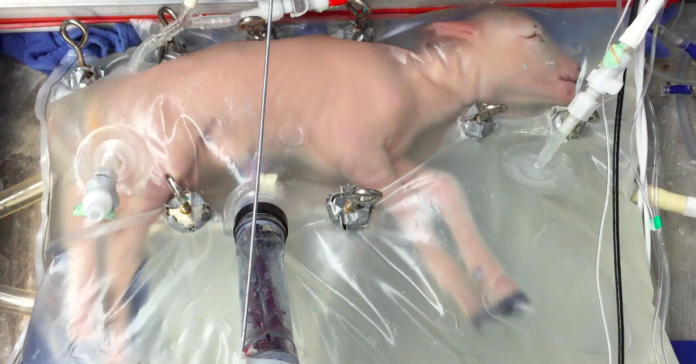 Inside what look like oversized ziplock bags strewn with tubes of blood and fluid, eight fetal lambs continued to develop — much like they would have inside their mothers. Over four weeks, their lungs and brains grew, they sprouted wool, opened their eyes, wriggled around, and learned to swallow, according to a new study that takes the first step toward an artificial womb. One day, this device could help to bring premature human babies to term outside the uterus — but right now, it has only been tested on sheep.

It’s appealing to imagine a world where artificial wombs grow babies, eliminating the health risk of pregnancy. But it’s important not to get ahead of the data, says Alan Flake, fetal surgeon at the Children’s Hospital of Philadelphia and lead author of today’s study. “It’s complete science fiction to think that you can take an embryo and get it through the early developmental process and put it on our machine without the mother being the critical element there,” he says.

Instead, the point of developing an external womb — which his team calls the Biobag — is to give infants born months too early a more natural, uterus-like environment to continue developing in, Flake says.

The Biobag may not look much like a womb, but it contains the same key parts: a clear plastic bag that encloses the fetal lamb and protects it from the outside world, like the uterus would; an electrolyte solution that bathes the lamb similarly to the amniotic fluid in the uterus; and a way for the fetus to circulate its blood and exchange carbon dioxide for oxygen. Flake and his colleagues published their results today in the journal Nature Communications.

Flake hopes the Biobag will improve the care options for extremely premature infants, who have “well documented, dismal outcomes,” he says. Prematurity is the leading cause of death for newborns. In the US, about 10 percent of babies are born prematurely — which means they were born before they reach 37 weeks of pregnancy. About 6 percent, or 30,000 of those births, are considered extremely premature, which means that they were born at or before the 28th week of pregnancy.

These infants require intensive support as they continue to develop outside their mothers’ bodies. The babies who survive delivery require mechanical ventilation, medications, and IVs that provide nutrition and fluids. If they make it out of the intensive care unit, many of these infants (between 20 to 50 percent of them) still suffer from a host of health conditions that arise from the stunted development of their organ systems.

“So parents have to make critical decisions about whether to use aggressive measures to keep these babies alive, or whether to allow for less painful, comfort care,” says neonatologist Elizabeth Rogers, co-director for the Intensive Care Nursery Follow-Up Program of UCSF Benioff Children’s Hospital, who was not involved in the study. “One of the unspoken things in extreme preterm birth is that there are families who say, ‘If I had known the outcome for my baby could be this bad, I wouldn’t have chosen to put her through everything.’”

That’s why for decades scientists have been trying to develop an artificial womb that would re-create a more natural environment for a premature baby to continue to develop in. One of the main challenges was re-creating the intricate circulatory system that connects mom to fetus: the mom’s blood flows to the baby and back, exchanging oxygen for carbon dioxide. The blood needs to flow with just enough pressure, but an external pump can damage the baby’s heart.

To solve this problem, Flake and his colleagues created a pumpless circulatory system. They connected the fetus’s umbilical blood vessels to a new kind of oxygenator, and the blood moved smoothly through the system. Smoothly enough, in fact, that the baby’s heartbeat was sufficient to power blood flow without another pump.

The next problem to solve was the risk for infections, which premature infants in open incubators face in the neonatal intensive care unit, or NICU. That’s where the bag and the artificial amniotic fluid comes in. The fluid flows in and out of the bag just like it would in a uterus, removing waste, shielding the infant from infectious germs in the hospital, and keeping the fetus’s developing lungs filled with fluid.

Flake and his colleagues tested the setup for up to four weeks on eight fetal lambs that were 105 to 120 days into pregnancy — about equivalent to human infants at 22 to 24 weeks of gestation. After the four weeks were up, they were switched onto a regular ventilator like a premature baby in a NICU.

The lambs’ health on the ventilator appeared nearly as good as a lamb the same age that had just been delivered by cesarean section. Then, the lambs were removed from the ventilator and all but one, which was developed enough to breathe on its own, were euthanized so the researchers could examine their organs. Their lungs and brains — the organ systems that are most vulnerable to damage in premature infants — looked uninjured and as developed as they should be in a lamb that grew in a mother.

Of course, lambs aren’t humans — and their brains develop at a somewhat different pace. The authors acknowledge that it’s going to take more research into the science and safety of this device before it can be used on human babies. They’ve already started testing it on human-sized lambs that were put in the Biobags earlier in pregnancy. And they are monitoring the few lambs that survived after being taken off the ventilator to look for long-term problems. So far, the lambs seem pretty healthy. “I think it’s realistic to think about three years for first-in-human trials,” Flake says.

“It’s so interesting, and it’s really innovative,” Rogers says. “To be able to continue to develop in an artificial environment can reduce the many problems caused by simply being born too early.” Rogers adds that not every facility has the resources or expertise to offer cutting-edge care to expecting mothers — a problem that the Biobag won’t be able to solve. “We know there are already disparities after preterm birth. If you have access to high-level regionalized care your outcomes are often better than if you don’t,” she says.

And Rogers worries about how hype surrounding the Biobag could impact parents coping with preterm infants. “I think many people have been affected by preterm birth and they think this is going to be some magic bullet. And I think that prematurity is just really complicated.” Preventing it in the first place should be a top priority, she says, but the Biobag could help drive that research forward.

For Flake, the research continues. “I’m still blown away, whenever I’m down looking at our lambs,” he says. “I think it’s just an amazing thing to sit there and watch the fetus on this support acting like it normally acts in the womb… It’s a really awe-inspiring endeavor to be able to continue normal gestation outside of the mom.”

The Best Set of Go Karts for Kids Reviewed in 2019

17 Cool Science Experiments For Kids (Do Try This At Home!)