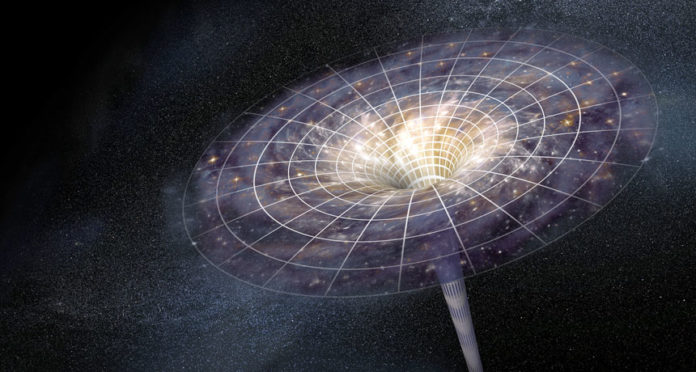 LAID BARE  Inside a black hole, the extreme curvature of space (shown) means that the standard rules of physics don’t apply. Such regions, called singularities, are thought to be shrouded by event horizons, but scientists showed that a singularity could be observable under certain conditions in a hypothetical curved spacetime.

Certain stealthy spacetime curiosities might be less hidden than thought, potentially exposing themselves to observers in some curved universes.

These oddities, known as singularities, are points in space where the standard laws of physics break down. Found at the centers of black holes, singularities are generally expected to be hidden from view, shielding the universe from their problematic properties. Now, scientists report in the May 5 Physical Review Letters that a singularity could be revealed in a hypothetical, saddle-shaped universe.

Previously, scientists found that singularities might not be concealed in hypothetical universes with more than three spatial dimensions. The new result marks the first time the possibility of such a “naked” singularity has been demonstrated in a three-dimensional universe. “That’s extremely important,” says physicist Gary Horowitz of the University of California, Santa Barbara. Horowitz, who was not involved with the new study, has conducted previous research that implied that a naked singularity could probably appear in such saddle-shaped universes.

In Einstein’s theory of gravity, the general theory of relativity, spacetime itself can be curved (SN: 10/17/15, p. 16). Massive objects such as stars bend the fabric of space, causing planets to orbit around them. A singularity occurs when the warping is so extreme that the equations of general relativity become nonsensical — as occurs in the center of a black hole. But black holes’ singularities are hidden by an event horizon, which encompasses a region around the singularity from which light can’t escape. The cosmic censorship conjecture, put forth in 1969 by mathematician and physicist Roger Penrose, proposes that all singularities will be similarly cloaked.

According to general relativity, hypothetical universes can take on various shapes. The known universe is nearly flat on large scales, meaning that the rules of standard textbook geometry apply and light travels in a straight line. But in universes that are curved, those rules go out the window. To demonstrate the violation of cosmic censorship, the researchers started with a curved geometry known as anti-de Sitter space, which is warped such that a light beam sent out into space will eventually return to the spot it came from. The researchers deformed the boundaries of this curved spacetime and observed that a region formed in which the curvature increased over time to arbitrarily large values, producing a naked singularity.

“I was very surprised,” says physicist Jorge Santos of the University of Cambridge, a coauthor of the study. “I always thought that gravity would somehow find a way” to maintain cosmic censorship.

Scientists have previously shown that cosmic censorship could be violated if a universe’s conditions were precisely arranged to conspire to produce a naked singularity. But the researchers’ new result is more general. “There’s nothing finely tuned or unnatural about their starting point,” says physicist Ruth Gregory of Durham University in England. That, she says, is “really interesting.”

But, Horowitz notes, there is a caveat. Because the violation occurs in a curved universe, not a flat one, the result “is not yet a completely convincing counterexample to the original idea.”

Despite the reliance on a curved universe, the result does have broader implications. That’s because gravity in anti-de Sitter space is thought to have connections to other theories. The physics of gravity in anti-de Sitter space seems to parallel that of some types of particle physics theories, set in fewer dimensions. So cosmic censorship violation in this realm could have consequences for seemingly unrelated ideas.

Get Science News headlines by e-mail.